Effective use of buildings is essential for saving money, a good work atmosphere, and productive work (source). When talking about effective use, people sometimes talk about utilisation and occupancy. But what’s the difference between them? In this blog, we’ll explain what utilisation is and why it matters.

Some people use occupancy and utilisation interchangeably but they are in fact describing quite different things. Occupancy is the average of how often a space is being occupied versus the total amount of times it could have been occupied. For example, when you have 100 meeting rooms, and only 20 are occupied daily, the occupancy is 20%. Utilisation is something different. Utilisation is the average of how many people are using an actively occupied space versus the total number of seats in the space. For example. if there is a room with 10 seats in total but only 5 seats are taken, then the utilisation rate is 50%.

Optimising your building use

To understand and improve the efficiency of building use, one must thus also look at utilisation next to occupancy. But maybe more important, just as the last example showed, it’s also useful to look at the activities that people are doing in the spaces. (Video) calling is an activity that happens more often in meeting spaces, causing low utilisation but high occupancy. Transforming large meeting spaces into smaller pods or several smaller meeting spaces will improve the efficient use of space. In the graph below, we grouped meeting space across several projects and compared the capacity with the number of people using them giving the utilisation rate. In the picture, you can see that the utilisation rate of these meeting rooms becomes less efficient the larger the spaces are. While spaces with a capacity of 1-10 people are often 100% utilised (giving an exact match). Large meeting rooms often utilize at least 30 people less than expected. However, depending on the organisational context, this picture might be different. 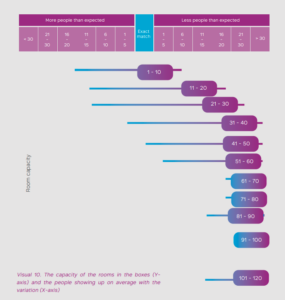 Why is utilisation higher than occupancy? 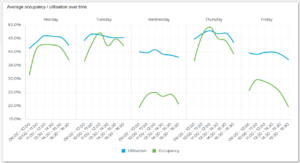 Understanding and looking both at utilisation and occupancy is very useful to improve your building efficiency. If you combine this data with observing the activities in these spaces, this can provide you with very useful additional information (such as video calling in meeting spaces). Get in touch with us if you are interested in measuring utilisation, occupancy and activities in your office building. Because effective building use can save you money, and improve the working atmosphere and productivity.