Zuyd University of Applied Sciences had already been using measurements to objectify the use of education rooms and the feeling that a building was too small. Initially, this was done manually. Since last summer, this has been digitised, and (partly as a result of the Covid-19 discussion on the subject) sensors are used to measure not only occupancy but also the CO2 content. This was done in collaboration with Smart WorkPlace partner Measuremen, a loyal partner of Zuyd University for many years.

Sander Notermans is since the beginning of September 2021 coordinator P2P (purchase to pay) at Zuyd University of Applied Sciences. He is responsible for the entire process from professional procurement to the moment the invoice can be paid. Until September 2021, as (ICT) Service manager, he was responsible for carrying out occupancy rate measurements. “These measures started around 2006 and arose from a number of accommodation projects we had at that time. Together with an external organisation we developed a toolbox with a measurement method for answering questions like: ‘is the room in use / not in use?’ and ‘how many people are in the room, and what is their activity?’ ” Mike van Horzen, who was team leader real estate and facility procurement ICT until 1 September 2021, and has since been the program manager for Housing and ICT at Zuyd University of Applied Sciences, adds: “We started doing this because we were coming up against the problem that we scheduled a room and immediately assumed that it was occupied, and that a number of people were present in that room. At the same time, we sometimes had six different academies in one building, which soon felt that the building was too small. We, however, are more into facts and figures and wanted to know if that was really the case. That’s why we started measuring if a space was occupied, and how many people were there.”

Initially, Zuyd University of Applied Sciences organised all the measurements itself, but around 2010 a triangle emerged. Zuyd University was the client, Facility Management students carried out the measurements, and Measuremen provided the reports and analyses. Mike: “As before, we took these measurements primarily at natural moments, i.e. during the construction of new buildings or renovation of existing locations. With the arrival of Measuremen, however, that process was digitised, and professionalised.”

In March 2021, the next step was taken. A pilot project at the Brusselseweg building in Maastricht, which is partly a national monument, and partly new construction dating from the 1980s. Van Horzen explains the history: “I am chairman of the Covid-19 core team within Zuyd University of Applied Sciences, which coordinates matters relating to Covid-19 internally. At a certain point we were told that in a number of older buildings there was a perception that the air quality, and the amount of CO2 was not good. We wanted to objectify that; as we did with the occupancy. Of course, we could have installed CO2 measures, but we are always looking to optimise the various objectives of Zuyd University. And because there was an occupancy perception there as well, we tried to look at it smartly. We did research on a system that could indicate whether the CO2 content was too high, and at the same time, give an answer to the question of how many people were in a room, and whether the room was occupied at all. In the long term, we also wanted to get rid of the need to send someone into a building 24/7.” 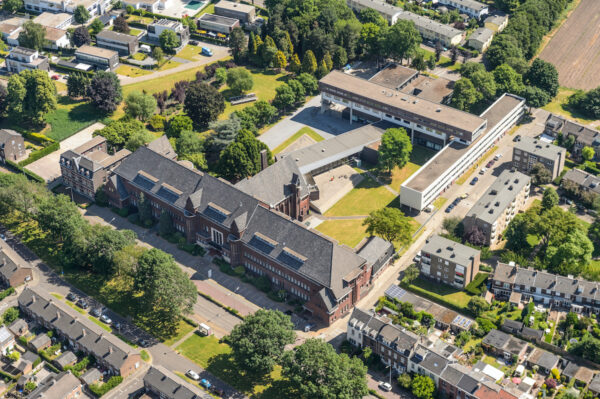 Zuyd University of Applied Sciences chose the Brusselseweg location for the pilot project because it had the most complaints. Van Horzen: “Together with the location management, we inventoried the education rooms in the building that gave the most complaints, and in those rooms we installed 200 occupancy sensors, and 50 CO2 sensors. First of all, the space had to be ventilated well so that teachers could teach in a healthy and safe environment, students could attend classes in a healthy and safe manner, and employees could work in a healthy and safe environment. At the same time, you can’t just put installations everywhere. So in certain rooms you have to see how far you can get by opening and closing windows and doors to get the CO2 back to a good level. Then you look at whether something technical can be done, and eventually you sometimes have to decide not to schedule certain rooms any more.” Notermans adds: “When looking for the right sensors, it was also important that the system would be transportable. So that we can always measure a certain period in a location.” In the first two-month period before the summer of 2021, the Brusselseweg location had an occupancy of about one-third of normal due to Covid. Notermans: “Still, it was valuable because it gave us a feeling of what to do in case of a CO2 alarm, and we got to know the system that way.” The building now has almost ‘normal’ occupancy again, and sensors have been installed in almost all education rooms. Notermans: “That means we can now extract all the data we want. 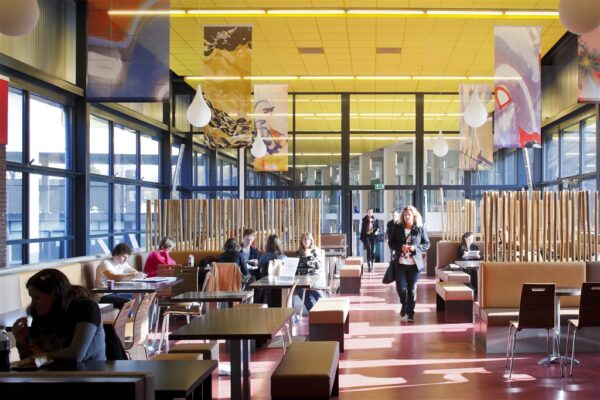 Van Horzen explains how things work in practice at the Brusselseweg. “When a notification pops up in the system, if excessively high values are received, a technical employee goes to the room, and checks whether the room is occupied, and whether windows and doors are open or closed. Incidentally, we consciously measure occupancy and not utilisation: that is because of the desire to be able to move around. This is easy with occupancy sensors. Utilisation sensors, on the other hand, are more static solutions, with a camera that takes a picture of the room or by means of people counting systems. These occupancy sensors also require power, and/or data above each door, which makes it an expensive solution.” The set CO2 concentration values are based on the various classes from the 2015 Programme of Requirements for Fresh Schools.(1) Notermans: “We get an initial notification at 900 ppm, which indicates that we are heading towards critical – 1200 ppm. At that point, a technical employee already takes action and looks. Measuremen then provides the broader perspective: based on the CO2 values, and the schedule, they know how many people have been in a class because they have certain key figures about average class attendance. In this way, we still get data about utilisation without the need for utilisation sensors.” 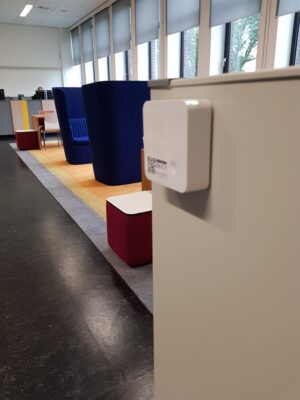 Van Horzen’s words fit perfectly with the overarching goal of Zuyd University of Applied Sciences: “As much money as possible should go to education. Because we want to provide high-quality education with optimal facilities. And that means that we must always be critical of the money we invest in our operations, and ask ourselves what it will bring us. And that is very clear with this investment: in the long run, it will allow us to facilitate much better and to spend less money on square metres. I believe that the perception ‘a building is full’ still contains the necessary bandwidth, which we are now trying to objectify with actual data. And that’s where the profit lies: we can either improve the timetable or we can improve the parameters used in the timetables, which are currently limiting for the creation of an optimal timetable. And there’s something else: at 20 per cent, we have a high no-show percentage. In other words, one in five classrooms is scheduled, but not used at that time.” To get a good picture of the data from the Brusselseweg, Notermans and Van Horzen work with a dashboard that shows the data in real time, but also the history. Filters can then be used to zoom in on a particular space or period. A classification has also been made into space types.

The pilot at the Brusselseweg runs for two education blocks of ten weeks, and ends at the end of 2021. After that, the system will move for a similar period to another location of Zuyd University of Applied Sciences, the building for Autonomous Fine Arts (AFA) in Maastricht. Van Horzen: “A period like this gives you a representative idea of how it works at a location. There are also differences between the use of, for example, Brusselseweg (where mainly languages are taught), and the AFA building with art education. Van Horzen: “That’s why we have a functionally useful square metre standard per student for each study programme. We distinguish three standards: high (7.8 m2), medium (4.2 m2 ), and low (2.2 m2 ).” The AFA building was chosen because it is going to be renovated. Van Horzen: “In the future, renovation or new construction will always be an important criterion for the use of these sensors. 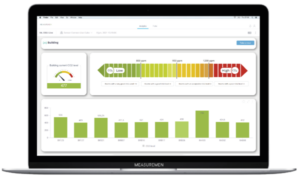 In the meantime, there is also the discussion about the extent to what way education will be hybrid post-corona. Van Horzen: “It is generally assumed that around 20% of higher vocational education will be online. I can see diversity within Zuyd University of Applied Sciences in this respect. We have a lot of practical training programmes, and I don’t expect that percentage to be reached by a long shot. That is why the credo is: online where it is possible, and fits in with the education. That 20 per cent is not a goal in itself. It won’t be down to the facilities. Van Horzen: “During Covid-19, we modified the facilities so that we now have hybrid classrooms, and can stream from most classrooms.

The ideal vision of the future

In the end, Van Horzen indicates what his ideal vision of the future is from the point of view of workplace management. “It would be great if we could use this system in every room at Zuyd University of Applied Sciences at all times. Measuremen is also given ‘homework’ to do: “In the future, I would like to see this system become even more integrated with data about humidity, and temperature. For example, so that we can also link it to building management systems.”

Do you want to know what the Sensor Connected Workplace can mean for your educational institution?