Overall, we know that hybrid working leads to relatively low occupancy in the offices, which might result in office loneliness. Where offices used to be packed and full of people, they are now much emptier and people are having fewer meetings (read our previous blog post: the office is not becoming a social clubhouse). Instead of people coming five days a week to the office. Now it’s down for many to 2-3 days a week. Near-empty office spaces and many virtual meetings don’t offer the experience that facility managers promise at the office: social connection, fun and collaboration. Hybrid working might cause people office loneliness, which might result in people rather avoiding the office. Because by staying at home you would avoid any disappointment. But there is a second negative effect that might make employees more lonely at the office.

Let’s imagine a very common situation: a hybrid flex office with an employee called Janet, head of sales. She works in an office with no assigned desks, but Janet likes to sit at the same desk by the window. Pre-Covid, she used to go there five days a week and do her work but now she works two days at the office. Janet also arrives at around 9:30 in the office, now she has more flexibility (this is also a general effect we observe in our data).  Janets comes in the office and walks to her usual desk where she used to sit with her sales team. She hopes that some of her team members show up, but they don’t. Michael and Andy always work from home on Monday, she vaguely remembers Pam had some errands at home, and she has no clue about Jim. She sits there alone, while Kevin from the project management team is sitting also alone on the other side of the office. Janet doesn’t dare to sit with him because of two reasons. The first one is that some of her team members might still come to sit with her. And the second one is that she doesn’t know if Kevin’s colleagues still show up. Since many people arrive a bit later at the office, since having more flexibility, it would be awkward to sit at a desk that other people usually use.

As a result, Janet remains sitting at her usual spot and sits alone for the rest of the day. She has a few virtual meetings with her colleagues at home, but she doesn’t experience the fun and social collaboration for which she travelled to the office. She experiences isolation and loneliness, even though she’s not alone at the office. It’s just hard to communicate with other colleagues who sit 5 desk clumps away. Now, she plans to rather work from home so at least she doesn’t get disappointed. This effect might spiral all the way to a completely deserted office. If people put effort into going to the office but don’t experience the social fun they expected, they might prefer to stay at home and work there. And everyone would do the same. 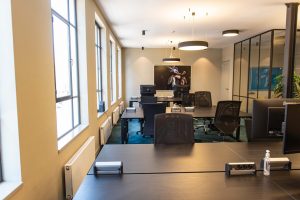 Of course, we want employees to experience the good things working at the office has to offer. It might only require a few actions to make your employees sit closer to each other and make them have fun. As a manager, you could walk across the office and stimulate people to change desks. A subtle newsletter or message might also contribute. You could remind your employees about the flex policies, and tell them how sitting closer to each other might make their workday more fun and engaging.

A positive side effect of stimulating people to sit together is the mixing of different departments. Usually, people sit together based on their department, but now you stimulate mixing, people who didn’t use to talk because they sat so far from each other, now get to know each other. This could enable collaboration, increase knowledge and engagement with other departments, and maybe even result in unexpected innovation. Who knows?

However, since old habits die hard it’s questionable whether a quick talk or message alone reduces the office loneliness caused by hybrid working. Booking software might be much more effective to enable collaboration and engagement. With desk booking software, employees can see which people are coming, and where they are going to sit. So, one never has to worry about whether “Janet” is coming to her favourite spot by the window. Being in fear that they sit at “her” spot. Sharing workspaces becomes much easier and more comfortable when one is aware of who is coming and when. It also makes it easier to pick workspaces close to preferred colleagues, which enhances collaboration. Team dynamics can also improve now team members are able to find each other and know when their colleagues will be at the office or not. Thirdly, desk booking software can also be used as a tool to change the habits of people. The design and use of the desk booking software can stimulate people to book different desks than they are used to. In this way, you can make them experiment and switch around. Lastly, as a manager, one gets insights into the booking behaviour and use of the office space. This gives you data-driven insights into the actual dispersion and occupancy. You can use these insights to stimulate people to sit together. Or you can see how everyone is nicely sharing space at the same desk clump. You can be the one who facilitates people to have fun and work together at the office. Good luck!